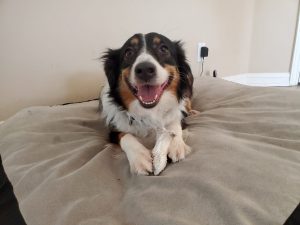 Once you start to rescue dogs, your name gets around, especially if you have been doing it as long as I have.

I joined Aussie Rescue SoCal 20 years ago and I am on the board of directors. I evaluate dogs for the Orange County area.

It’s never convenient when the call comes in for a rescuer to evaluate a dog. Typically, people tend to let go of their dogs during the summer months or around the holidays.

“The call” came in recently from the Orange County Animal Care Shelter. This shelter has just opened its doors to 140 Shih Tzus, so they were desperately looking to reduce their numbers.

The shelter had an Australian Shepherd in their isolation area, meaning she was not available for public adoption. She was very shy and cowering in the back of her kennel. She was turned in by a "good Samaritan" who said they found her. The officers suspected this was actually her owner, since the fee to relinquish a dog is very steep.

The Australian Shepherd was on a long line, just so the staff could catch her in this tiny kennel. She was panting wildly and her eyes were very red. The dogs all around her were going berserk as they do in “death row.”

The shelter manager brought her to a private yard where it was quieter. The Aussie avoided me and just looked up at the wall like, "Can I jump that and get out of here?!" Touching her was a definite NO. Thank goodness for the long line!

I was only supposed to evaluate her and get some information to post on Facebook to find someone who would foster her. However, she was a wreck and the clock was ticking, so I said I would take her in.

While I filled out paperwork, the manager had her in the lobby of the shelter. She handled people and dogs coming and going pretty well. There was hope! I got her to the car and she wanted in, a good sign.

Day 1 - Welcome to the Zurborg Ranch

I took her to the Wags & Wiggles Tustin facility and placed her in a small room so I could evaluate her some more. She wasn't interested in food or water and avoided everything and everyone.

Sweetie knew enough about leashes that she continuously tried to back out of her collar and run. She was not leash trained at all and pulled like a freight train, running the risk of her getting away from me.

I made the decision – she needed to come home with me. Just what I needed, another animal at the Zurborg ranch! Especially an animal that wanted nothing to do with me. My thoughts were racing – Was she feral? Is she adoptable? What did I get myself into?

The "good Samaritan" said they didn't know her name, so I named her Sweetie. The name was partly a big giant wish.

The first step was to get another collar and leash on her for safety. After I got her home, she finally warmed up enough to eat treats. However, she was so terrified of my hands that all food had to be thrown towards her. After a lot of patience, coaxing, and bribery involving the tastiest treats, I was able to get a total of two collars, a long line, a regular leash, AND a slip leash on her.

All of this took place in my car because this was where she was most comfortable. She was TERRIFIED to come inside and wanted out of my house immediately.

On day two, I needed to inspect her more thoroughly physically. I could see dreadlocks hanging from her ears, so who knows how many mats or injuries she had under her belly or around her rear end.

She was still terrified of hands coming near her head, neck, and back, so I enlisted the help of Kelly, our RSM Assistant Training Manager. It took us three hours to work through getting a muzzle on her, shaving her read end, clipping off her dreadlocks, and giving her a bath.

It was a lot for all three of us (and pretty scary!) but she never once actually snapped to harm me. In the end, she was not the most fashionable Aussie, but she was so much happier. She was freed from the confines of her own fur!

Sweetie met my husband, Dave, for the first time on day three. Upon sight of him, she wanted to run. He threw tasty hot dogs her way, but never touched her or approached her.

After a couple of five-minute sessions, he became the really cool hot dog guy and would wag her tail when she saw him! She was so easy to win over.

We had a breakthrough on day four. Sweetie nuzzled my hand, wanting to be pet. It was her first solicitation for physical contact. We still had to go slowly when putting a leash on or touching her back, but it was a HUGE step!

In addition, she also learned her first food puzzle. Giving her opportunities to conquer her environment was critical in her recovery.

On day five, I was finally able to remove Sweetie’s collar and nasty long line from the shelter that was permanently bound in her neck fur. She finally accepted being in the house and we camped her in a spare bedroom away from all of the other animals.

Sweetie has visited Wags every day meeting our team and getting used to strangers. She is always suspicious at first meeting, but hot dogs have made the introductions go smoothly!

Sweetie had her first lessons with Steve in K9 Nose Work to build her confidence with men and new situations. Kelly walked her around on the leash, her first human besides me to do so!

Each day we went for long walks in a rural area where Sweetie could decompress, sniff, and be a normal dog. I introduced her to a few of my dogs. She isn't aggressive, but she's too assertive with them to be trustworthy at this point. She mostly just doesn’t know what to do around other dogs, and the best defense is a good offense!

We are going to spend the next couple of weeks exposing Sweetie to more people and other animals. We can also start taking adoption applications!

Sweetie would do best in a home with no children or other animals. The adopter should work from home or be retired so they can spend time working with her. If you’d like more information or would like to be considered for adoption, email Laurie.

Humans treated her poorly and tried to ruin her spirit, but Sweetie is truly a wonderful dog. She is strong, forgiving, and wants to be someone's best dog.

Every time I rescue a dog, I know that I do so because there is someone out there waiting for this particular dog. I am like the way station that does the rehabilitation and hard work so I can unite the human and dog that were meant to be together.