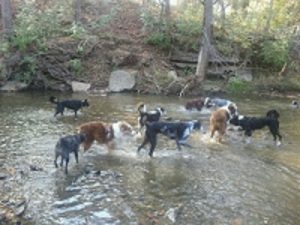 The trip to Kentucky for the USDAA Agility 2011 Nationals was a good trip but not a great trip.

We didn’t come back with any wins or trophies this year.

While I was proud of what we did, we just had an off trial. Gumbo, my steady Catahoula, and I were just not in sync.

After close examination of the video, there wasn’t anything obvious I did most of the time – we were just off. He was paying attention and trying hard.

It just figures we won almost every event all year long and then not do well at nationals.

Luckily, my long time agility partner and friend Shelley Permann won Performance Grand Prix and Performance Speed Jumping with her 10 yr old Cardigan Corgi, so at least I got to celebrate with her.

Gem, my 2-yr old border collie, was just fabulous for her age. And Gator, my Pyrenean Shepherd, actually was the most consistent of all my dogs (which is quite the shocker considering we joke that “he’s got issues”).

We had other lessons to learn apparently and the one thing I took away from my trip is that training your dog to handle the real world, come when called and be social makes traveling much more enjoyable.

The best time we had was finding a river for the dogs to swim. Then other agility competitors showed up with their pack and it was game on. 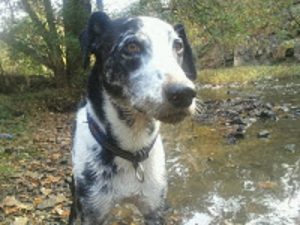 Gumbo’s most memorable moment was at the river. Gumbo disappeared for awhile unnoticed. He dug up a mole, tossed it around and about to swallow!

She yells “no way – he’s growling at me”

and I get into a muddy wrestling match to save the mole. Guess who won? Yes, Gumbo got the prize. 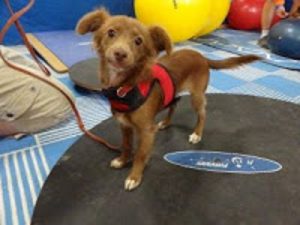 Rodent, my new agility chihuahua, was adored by all at the event.

He learned to be handled by strangers, get measured, sit in the stands, and beg for food.

He also was a frequent visitor of the FitPaws booth where he wobbled, jumped, tumbled, and learned about his body.

He even kept his anger management in check and made some new doggie friends. That’s not easy for him.

USDAA did a really great job this year and really listened to the competitor complaints from last year.

The running surface was much better, the competitor result area was much better, and the dust was virtually non-existent. I applaud USDAA for their efforts. Not to mention the courses were perfectly tough yet fun.

The best news is that next year the event will be in Colorado. So excited not to drive to Kentucky again.

Lastly, the IFCS 2012 World Team was announced at nationals. Sadly, Gem will not be on the team but it wasn’t expected since she was the youngest dog to try out.

It was a great learning experience for us all and we hope to be selected for a future world team. Rachel Sanders, the World Team Coach, will be coming to Wags & Wiggles to share her expertise with us in December.