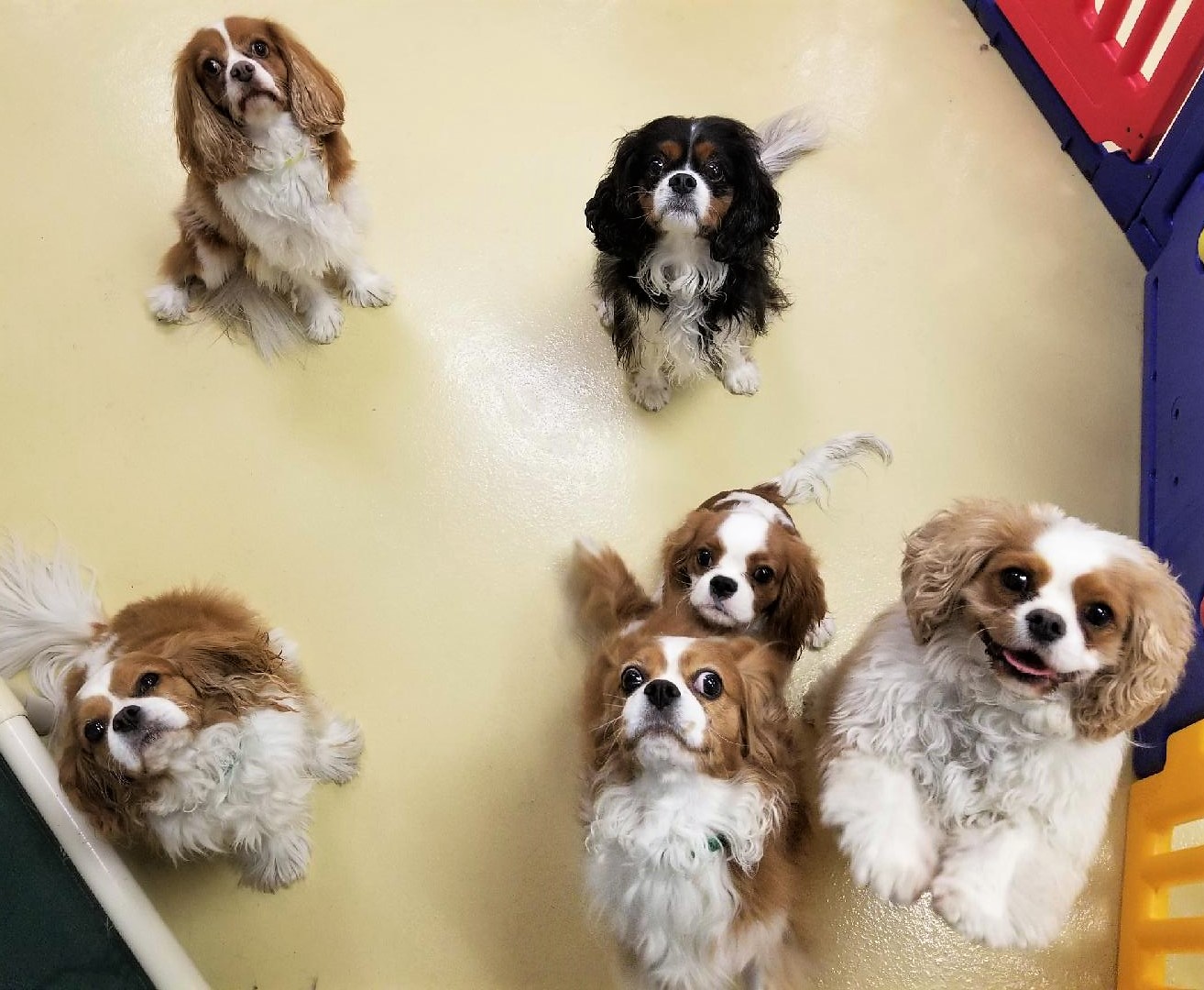 Cavalier King Charles are sweet, loving, and are affectionately called the “love sponges” of dogs!

In our daycare environment, you can typically find them playing nicely, napping, or cuddling with our team members. In fact, we often recruit our regular Cavaliers to help out new Waggers during Meet & Greet appointments!

The ancestors of the modern-day Cavalier King Charles were lap warmers of royalty and the subjects of paintings throughout the 1500s, 1600s, and 1700s. These early toy spaniels were even welcomed into their owners’ beds! They attracted fleas away from humans and were used as heating pads to soothe aching stomachs and joints.

These toy spaniels were incredibly popular with King Charles II of England, which is where the modern-day breed gets it’s name from! Some even said that Charles II seemed more concerned with breeding spaniels than ruling Britain!

Toy spaniels remained a favorite breed throughout the early 19th century. Later on in the century, the toy spaniels were crossbred with different Asian toy breeds, most likely the Pug and the Japanese Chin. These dogs became known as the English Toy Spaniel.

This newer type of toy spaniel has slightly different facial features and is a bit smaller than the spaniels King Charles loved so much. This newer type gained popularity and soon the traditional spaniel was nearly extinct!

In the mid 1920s, an American named Roswell Eldridge offered a significant cash prize for anyone who could breed “Spaniels of the Old World type.”. This motivated many breeders to try and revive the traditional-looking spaniel. Viola! The modern-day Cavalier King Charles was born. 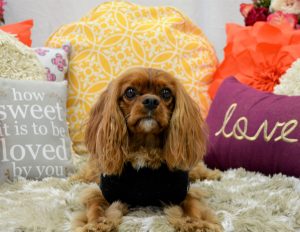 Cavaliers are sweet, loving, playful, affectionate, and laid back! This breed is great with children and other dogs. Cavaliers can be active and energetic or lazy couch potatoes depending on their owner’s lifestyle. They are typically up for anything as long as they are with their people!

These dogs are not independent and will be pretty much glued to your hip. If you’re looking for a breed that can handle being alone for longer periods of time, this is not the breed for you!

Cavaliers are on the sensitive side and benefit most from positive reinforcement training. They are eager to please! Socialization is super important for this breed as they can suffer from separation anxiety. 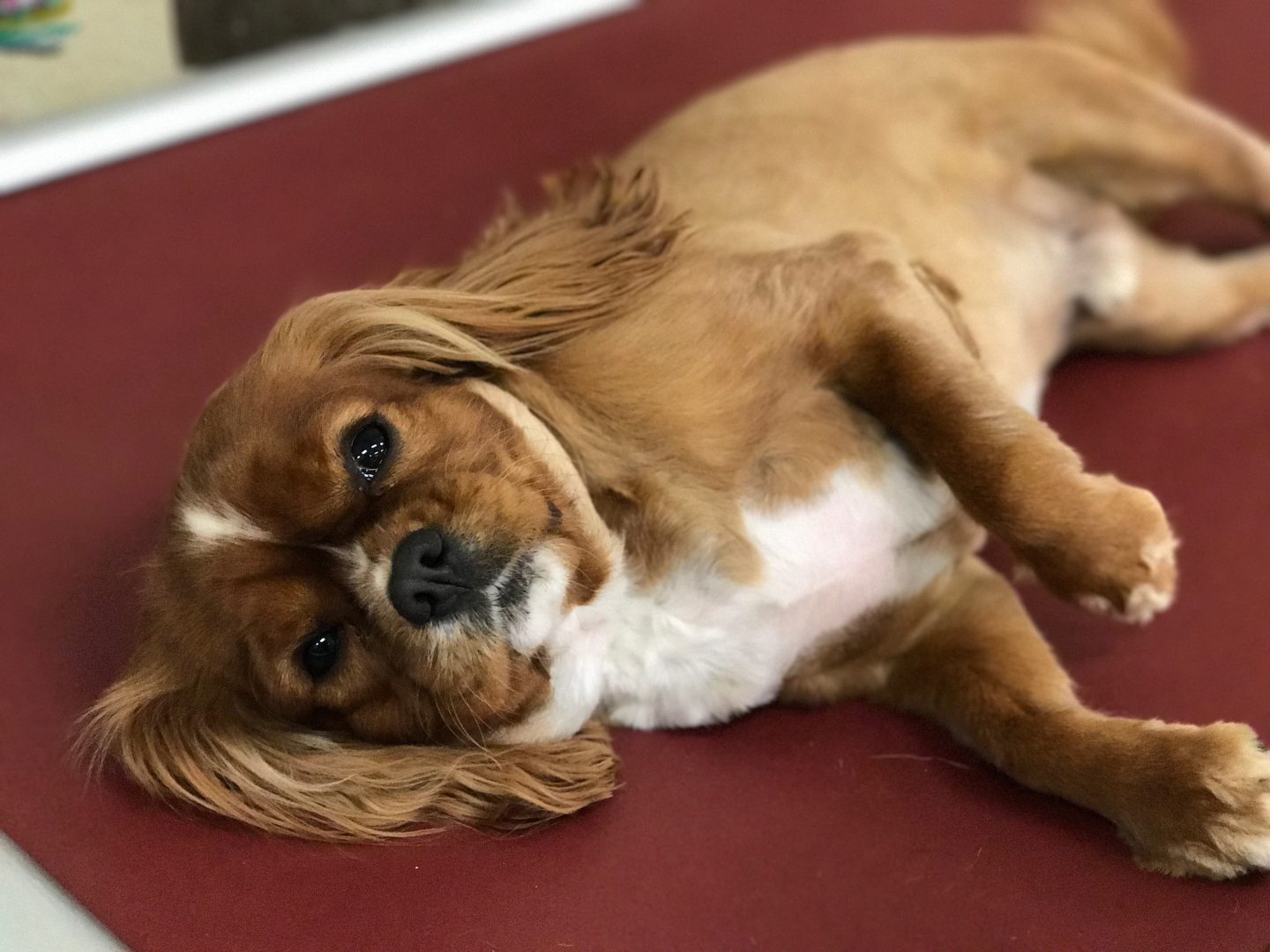 Cavalier King Charles require regular brushing and bathing. Some owners choose to trim the longer feathering as it attracts dirt and grass, but hair cutting is not required.

Cavaliers can go on regular walks, jogs, or hikes, but they’re just as happy to lounge all day, too! Of course, puppies will have higher energy than fully grown adults. Attending puppy class is a great way to get their energy out!

This breed is prone to a few different genetic diseases, such as heart problems and hip dysplasia. It’s very important to feed this breed a high-quality dog food. It’s also important to do research on potential breeders that test for genetic health problems!

If you have any questions about Cavaliers, feel free to contact us.