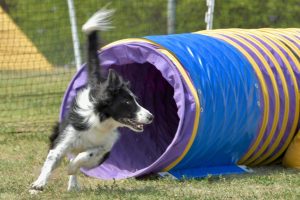 You may know Laurie Zurborg, owner of Wags and Wiggles, as the dog nanny that created Disneyland for your dog. She also has a passion for the sport of Dog Agility! Laurie has represented the USA on World Agility Team twice before, traveling to Italy and Netherlands.

Laurie started training her first Agility dog in 1995. Dog Agility has changed a lot in that time -- it is even being considered for the Olympics.

Her first Agility dog, Foster, an Australian Shepherd/Springer Spaniel mix, was a real handful that benefited from the training that comes from Agility. It wasn't all about the obstacles which Foster mastered easily. It was about the focus, listening to cues, and having the desire to be with their human even when off the leash. At her first Agility trial, Foster crested the aframe, made eye contact with a smiling observer, and ran off right to them. We know so much more now about motivation and reinforcement that would've really helped with Foster.

Laurie's only regret about Dog Agility is that she didn't get started as a kid. She has seen so many young people become natural Agility handlers. The competition, responsibility, and camaraderie builds a lot of character too. Young Agility handlers can really run through the courses.

Laurie says though as she has gotten older, the dogs are better trained to understand their jobs and perform at a distance. She trains smarter, not harder.

If you want to give Agility a try, then check when our next Agility classes will be happening!

Watch Laurie and Ticket in action during an Agility trial! Don't forget to subscribe to the Wags & Wiggles Youtube channel while you are there!